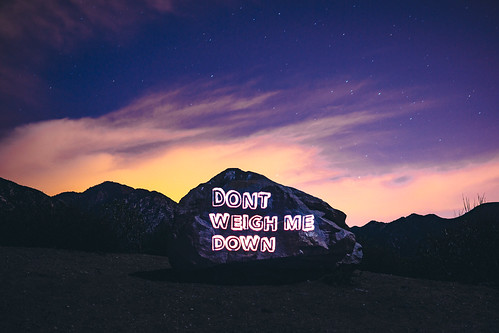 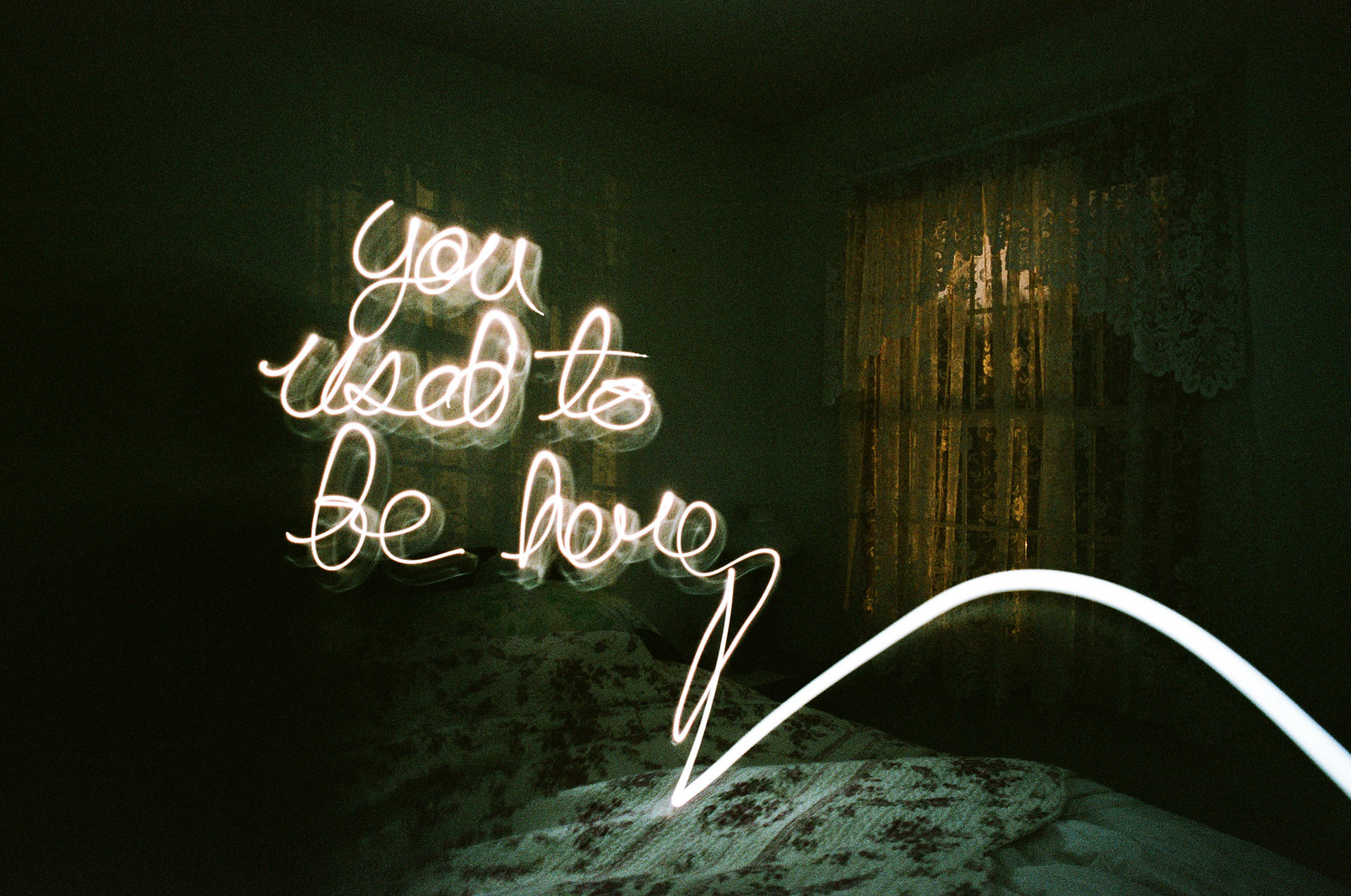 When you’re little, night time is scary because there are monsters hiding right under the bed. When you get older, the monsters are different. Self doubt, loneliness, regret. And though you may be older and wiser, you still find yourself scared of the dark. Sleep. Its the easiest thing to do. You just close your eyes. But for so many of us, sleep seems out of grasp. We want it, but we don’t know how to get it. But once we face our demons, face our fears and turn to each other for help, night time isn’t so scary because we realize we aren’t all alone in the dark.

In The Midnight Hour

“it’s easier to be alone, because what if you learn that you need love, and then don’t have it? can you survive that type of pain?” It’s hard to know if everything just seems bad, or it actually is. They say it’s darkest before the dawn. But even if dawn does come, everything that happened remains.
I wish i could recognise that person i used to be. Eager, open, fervent. I wish i could say that everything that I went through made me stronger. They definitely changed things. I’m definitely different. Just not in the way that would help me.

i don’t even know why i’m always tired. probably from holding on to too many things that i should’ve let go a long time ago

Well, what better time is there to blog? Probably plenty, but i don’t know if any of them will fall into my lap. My blog is here for when the better times escape my reach. Every so often, you declare that you just can’t take it and then desperately try to temporarily not think about the bad things that you did and put everything that’s wrong with you to the side just for a minute. In that calm before the storm, when you’re holding on irrationally to that hope that it would last, you fend off the dread of the next argument. The next fight, the next fallout. Finding out the end of the short interval. Just coil up and shut my eyes tight, as if it would help me brace myself when it inevitably approaches. Yesterday, my sister took me to brunch at The Coffee Barun and today she took me to Nest Bistro. Everyone fights over her, and wants her attention for themselves, and it makes me wonder what will happen one day when i inevitably won’t get as much quality time with her anymore. What sort of intervals will my life consist of then?

Tomorrow morning will be the Golden Globes. There are already countdowns that have stared. Some people will have things to be excited about. Twitter is gonna blow up with red carpet arrival photos and acceptance speeches. Everyone’s timeline is gonna be so lit. In so much haste, forgetting the underlying question of representation despite being driven in the first place by the hope we attach to it. Another event, and like the others, it’ll pass. And then i realise, it’s just another day after all.

Maybe it’s too early to tell?
I feel like there was never any use believing everyone about everyday being a new day with new possibilities and hope and another chance for things to be better. It’s nothing more than room for more mistakes. New ones in ways i didn’t think possible. And with new mistakes, new ways of feeling humiliated.
Right and wrong, good and bad, calories and kilograms. So many years, and still so uncertain about it all.
A new year doesn’t help you leave everything bad behind. I’m still going to live every day paying for what I did in all the years past. A new year isn’t going to free me from that.
We’re always going to be held to standards, there’s always going to be judgement. I’m still me. I’m always going to be less than. Why would I think that anything would ever change?

I don’t know if there’s anything for me to look back fondly on this past year. I don’t know if i could say that 2016 was a year that I had any instance of being happy. Nonetheless, every year that i bid goodbye to is a loss to mourn. It’s strange. It’s not like there’s nothing I have to look forward to in 2017. There are so many things i’m dreading in 2017. There’s nothing to want. There’s just everything to fear, cowering under the inevitable. Just another year that passes, just another year that i’m that much older, another year my age becomes that much more unforgiving. So many times over, every year, there’s just no answer. No possible way for things to be okay again unless a miracle happens. I’m still a slave to circumstance, just stuck.
I don’t know how much more of it i’m supposed to take. Once again, expected to make the coming year better somehow, without any real way to. Another year draws to a close where nothing panned out for me and it’s all my fault. Another new year’s eve where i feel helpless, but i shouldn’t because it’s irrational and not trying hard enough. There’s nothing left to do but hope that i can at least appear to face it with grace, feign a calm reaction, remain reasonably upright.
I want to wish everyone a happy new year. If i could hold back my jealousy.
I don’t know what will happen, and i believe my doubts are valid. So, no guarantees. We’ll just have to see how i come out of this. And whether it’s gonna be this time around, or the last time ever.

@LiaMarieJohnson sorry that you don’t get discriminated 🙃hurt, bullied, judged by, fake friends! You are truly flawless omfg 2016 MY year 😍

Sometimes, everything in your life could look really good, especially on paper. You’re where you want to be, and you’ve found that predictability and normalcy that fulfils your body’s desperate need for healthy routines. But life is funny, in that you could somehow just feel that you’re sitting next to the wrong person, that you feel their smile just isn’t wide enough, your hands never felt quite right together, or their name always sat odd on your tongue when saying it. Sometimes there’s just no exact reason or explanation for what your heart wants, and you find yourself attempting to smile about things the way your friends expect a person who’s so close with their family would.

There’s this thing that i had in the past. This habit, where i would put certain people on a pedestal. Everyone seems to think i have such impossible standards. But the truth is, i really don’t think it takes much to get on my good side. I’m so easily impressed, and if you’ve seen me gush about colleagues or bosses you would even think i’m really naive, easily influenced, and so trusting of people who so much as give one polite commendation. You really could just say you’re a vegetarian, you recycle, support neopronouns, have awareness about marginalised groups, or just know how to use the influence you have for those not as privileged as you; and you’d be on my shortlist. Everyone sometimes does things that are driven by the qualities they wish they had. My motivations just happen to be the things that i don’t like about myself. It’s a complicated thing, when how you feel about yourself affects so much your interactions with people around you.

So anyway, here i am again. Another new year’s eve, desperately trying to cling to this ending year because i’m so afraid of what’s to come. Everyone around me has their plans with important people for ringing in the new year. For me, regardless what the date is, it’s just another day waiting for something that’s never gonna happen. I’ll always just be me. It’s something that I always thought I wanted, but i’m transparent enough that people are able to see right through that, before I even realised it myself.

Not everyone feels that looking at life from different perspectives, being liberal, creative, & unconventional are things to celebrate.